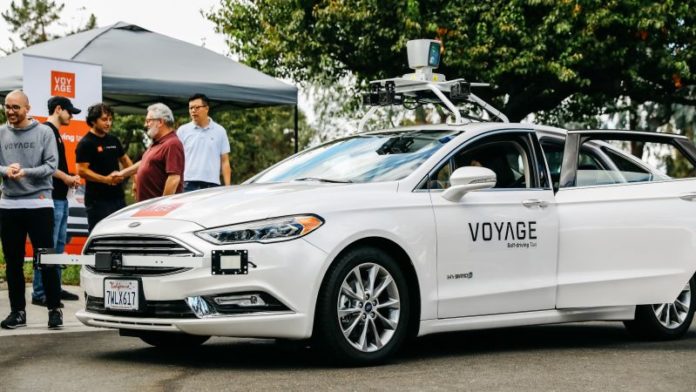 Most experts agree that robot cars will first roll out as fleets of self-driving taxis in controlled environments — college campuses, business parks, dedicated freeway lanes, or downtowns of congested cities. And we’re already starting to see the first hints of those types of services. A new one called Voyage just launched in a retirement community in California today.

Two self-driving Ford Fusions (with a third on the way) will offer trips to the 4,000 residents of the Villages, a gated community for senior citizens in San Jose. There are 15 miles of roads within the community for Voyage’s self-driving cars to learn how to interact with pedestrians, animals, roundabouts, and golf carts. The speed limit is only 25 mph, which helps reduce the risk if something goes wrong. (The New York Times had a nice write-up about it today.)

The speed limit is only 25 mph

“We looked for the perfect mixture of: passenger need and scale, complex and chaotic road, and a slight reduction in speed (which occurs as a result of golf carts sharing the road with lots of cars),” Oliver Cameron, Voyage’s 29-year-old CEO, told The Verge in an email. “It turns out that very few places fit this description, especially in the Bay Area. We got to know The Villages leadership, and we were lucky to get permission to deploy.”

Getting that permission was a bit of a bumpy ride, according to the Times. California requires autonomous vehicles to have $5 million of insurance coverage, but the Villages insisted on 50 percent more because it is a private community with increased liability. Eventually, the insurance broker that agreed to the policy did so on the contingency that Voyage share the data produced by its cars.

Voyage is a spin-off from Udacity, an online learning service that offers courses in driverless technology. Cameron headed the startup’s open source self-driving project before launching his own venture. Sebastian Thrun, Udacity’s chairman and the founder of Google’s self-driving car project, was briefly chairmen of Voyage before a conflict (he is also the chief executive of Kitty Hawk, the hoverbike startup backed by Larry Page, chief executive of Alphabet, which owns Waymo) forced him to step down.

Voyage’s self-driving taxi service isn’t alone. Waymo is operating a limited service using its autonomous minivans in Arizona, and is rumored to be close to launching a broader, commercial ride-hailing operation before the end of the year. Uber is also offering trips in self-driving SUVs in Arizona, as well as Pittsburgh. And a variety of driverless shuttle services have been popping up on college campuses and business parks around the country.

Cameron says if the pilot service in the Villages goes well, he hopes to expand to a larger community — maybe even a whole city. “It’s the perfect first deployment, where we get to solve real problems for real people,” he said.