Dermot O’Shea, Taoglas CEO and co-founder, said that ThinkWireless, based in Coconut Creek, Fla., has great experience in the commercial trucking industry, GPS antennas, with SiriusXM satellite radio and other markets.  He said that the company’s seven employees, including CEO Argy Petros and Pierre Wassom, director of RF technology, will remain.

“We can help them with higher-volume    production and scaling the business.  It’s a very good fit,” O’Shea said at the recent CES conference. “We have a strong presence in all markets, not just trucks and commercial vehicles, so what ThinkWireless was lacking in terms of size and global presence will be improved.”

Taoglas said that ThinkWireless antennas will be available on its website and distribution partners through the company’s Antenna Builder custom antenna and cable assemblies ecommerce platform.

At CES, Taoglas showed off scooters from Oxnard, Calif.-based OjO that incorporates a CalAmp telematics unit with two company antennas embedded.  Scooters are a surprise market for Taoglas.

“We had a big uplift in scooter business.  Frankly, we didn’t see that coming with those types of numbers,” he said.  “Now we see them all over the streets.”

O’Shea said that CalAmp has been a partner of the company for more than 12 years.  “Our San Diego office is close to their engineering facility.  We have been able to scale with them as CalAmp’s business has grown from 5,000 [telematics] to tens of thousands of devices.” 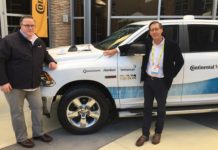